Code for America is working to transform the way government delivers services to those most impacted by the criminal justice system.

In the U.S. today, 1 in 3 people have a criminal record that appears on a routine background check. Even a minor criminal record can present lifetime barriers to obtaining jobs, housing, and education, and put other opportunities out of reach. The barriers associated with a record can have ripple effects for generations: Nearly half of all U.S. children now have at least one parent with a criminal record, with negative consequences for children’s cognitive development, school performance, and even employment outcomes in adulthood.

Nearly every state has existing laws that allow people to seal or clear their criminal record after a crime-free period. Unfortunately, under the cumbersome and complicated, petition-based system used in most states, only a tiny fraction of people eligible for expungement or sealing ever obtain the relief they need. Navigating the complex record-clearing process can prove extremely challenging, often requiring expensive legal assistance and court fees—making it impossible for millions to move on with their lives.

At Code for America, we believe that government can work dramatically better than it does today, and the criminal justice system is one of the areas where we are most failing the American people. The Clear My Record initiative aims to help state governments automatically clear all eligible criminal records by expanding, streamlining, and automating the record clearance process. 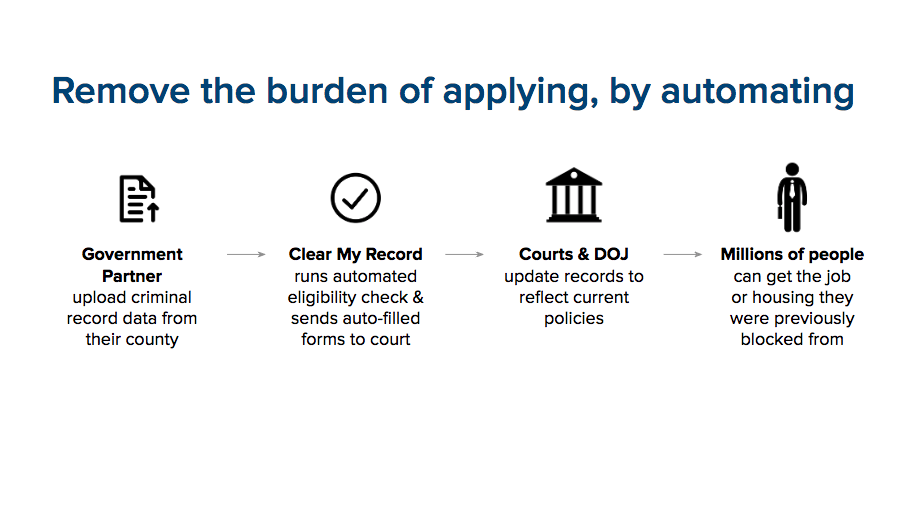 Clear My Record helps state governments leverage technology and human-centered design to advance automatic record clearance, with the goal of clearing all eligible criminal records in the U.S.

Code for America is a steering committee member of the Clean Slate Initiative, a bipartisan national movement to automate the clearing of criminal records that block second chances for tens of millions of people. Specifically, the Clean Slate Initiative supports state-led legislative campaigns to replace the petition-based record clearance process with automated clearing of criminal records—and to expand the number and types of records eligible to be sealed, expunged, set aside, or otherwise shielded from public view.

Automatic record clearance, also known as “Clean Slate” policies, are possible, as we’ve seen in states like Pennsylvania and Utah.

At Code for America, we have shown that automatic record clearance is possible in California and Illinois. We have developed core technology that reads criminal history data, then maps data to determine eligibility for relief under the applicable statute, and produces the necessary documentation for courts to update records. Through a pilot partnership with five District Attorney’s Offices in CA, this technology helped clear 75,000 marijuana convictions. We then expanded the technology, releasing it statewide to all remaining District Attorneys in California, which will help government clear up to 145,000 more convictions.  In Illinois, we partnered with the Cook County State’s Attorney to clear tens of thousands of marijuana convictions. We are leveraging our learnings to streamline and automate the broader expungement and sealing process in the state.

We work with state governments to fundamentally rethink the process of record clearance, leveraging technology and user-centered design to reinvest in communities by removing barriers to employment, housing, health, and education. The Clear My Record team—as part of the Clean Slate Initiative—partners with courts, criminal history repositories, other executive branch agencies in state government, policymakers, and advocacy groups to design clean slate policies that are implementable by government and beneficial for people. 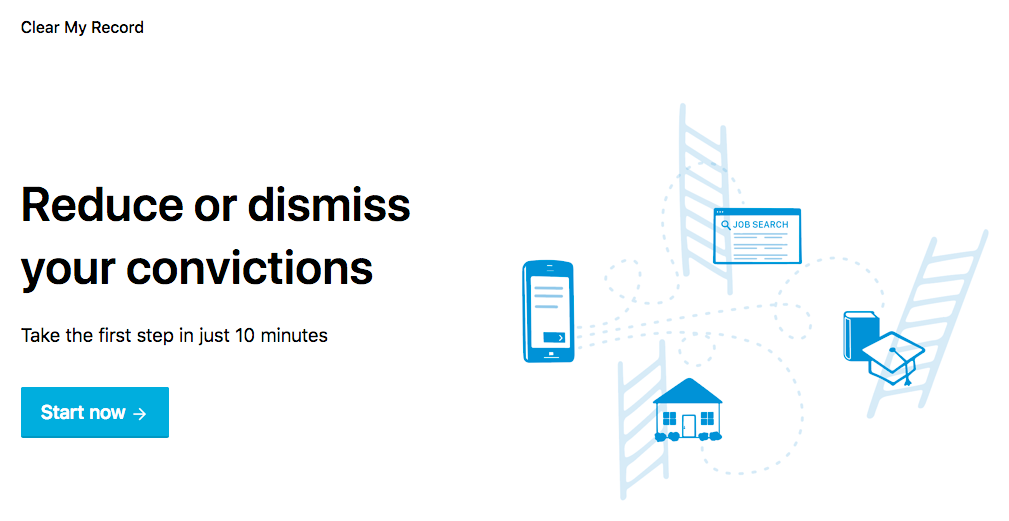 Clear My Record, built by Code for America, is a free online tool that helps people with eligible convictions to navigate the complicated journey toward clearing their record. About 43% of people who apply to Clear My Record have convictions in multiple counties —making it even more challenging to navigate through the record clearance process. With Clear My Record, you fill out a 10-minute online application and get connected with a public defender or legal aid attorney who can handle your case in the relevant county. Since April 2016, Clear My Record has connected over 10,000 people with attorneys in over 15 California counties. Clear My Record also supports fast text message and email communications between clients and attorneys, reducing the average time to hear back from an attorney from 3 months to 3-7 days.  Click here to access this online tool.

Record Clearance at Scale: How Clear My Record Helped Reduce or Dismiss 144,000 Convictions in California

Ushering in a new era for record clearance, and what's next for relief

What people are saying about Clear My Record