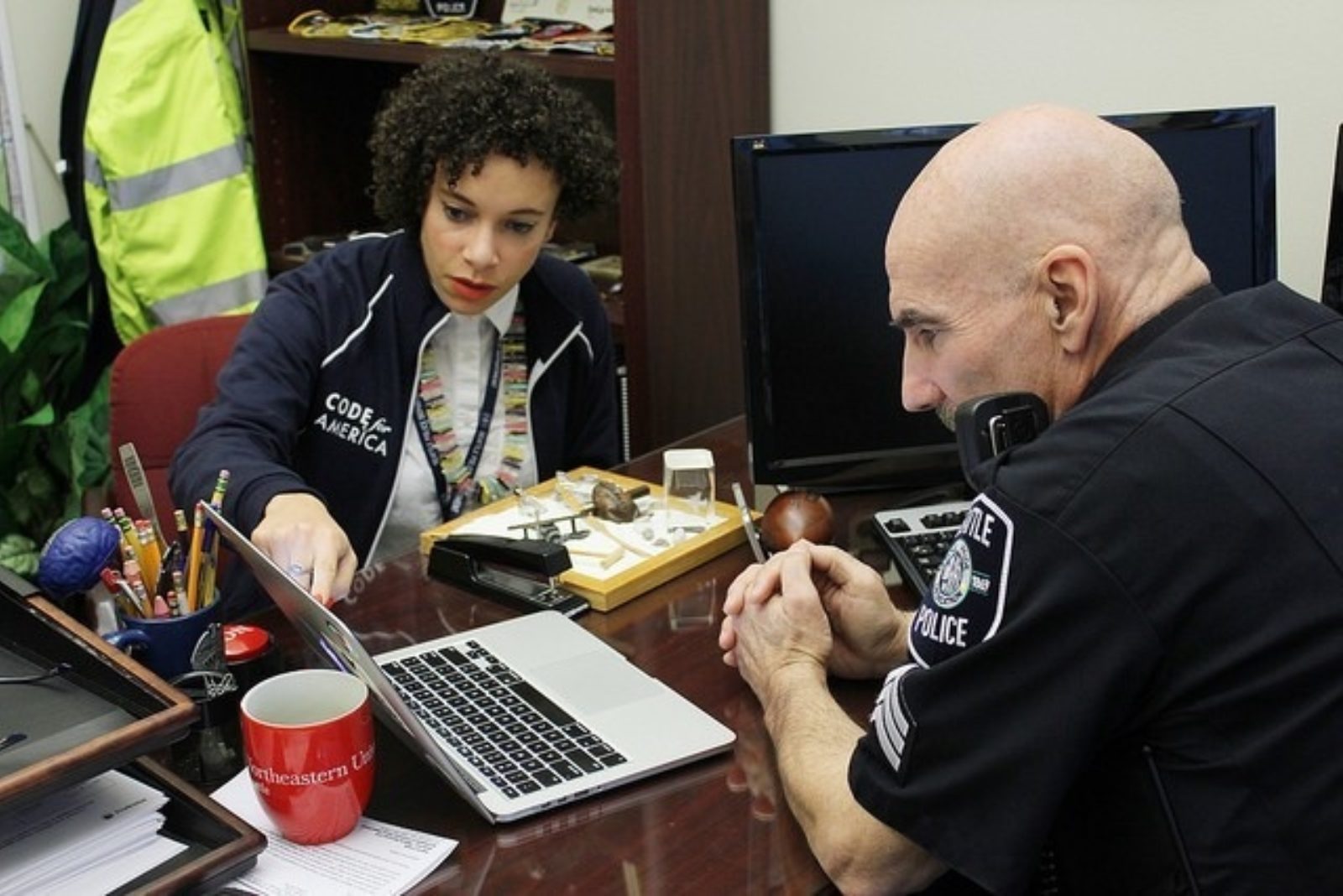 Code for America fellow Meredith Hitchcock with our partner in the Seattle Police Department.

There is a lot to say. Most things will be better said by others . Here’s one thing I will say today.

Today, public servants at all levels of government all over the country got up and went to work. They’ve done this the day after every election, whether they agreed with the outcome or not. The police officers in Seattle we partner with came to work, the welfare officers and eligibility workers our food assistance team partners with came to work, and our partners in City Halls, county government offices and state capitols across the country came to work. A half dozen emails arrived in my inbox this morning from federal government employees, none of them related to the election. They were about modernizing our digital infrastructure, next steps on open data, important provisions in bills that must be implemented in order to effectively serve the public.

In the District of Columbia, only 4% of the electorate voted for Donald Trump. But career civil servants will work for a Trump administration starting January 21st. Almost all of them will do everything they can to serve their real bosses: the American public. That’s true no matter who is in office.

Those who serve our fellow Americans through administrations include folks like Noah Kunin, a technology professional any startup would fight to hire, who has worked at 18F since almost the beginning. He’s staying, and he wants you to understand why . It presumably also includes his boss, Rob Cook, a senior executive from Pixar who only recently agreed to come to DC to serve the American people as the head of the Technology Transformation Service. Others will choose to leave, and I respect that choice as well, but I’m grateful to those who stay.

The fact that government doesn’t work better for all Americans was undoubtedly one of the central issues in this campaign. Many who voted don’t feel they have a voice, don’t feel economically secure, don’t know what their future looks like. In many cases there is a role government can and should play in mitigating these problems. Government can work better, and there is a non-partisan movement, made up of people inside and outside of government, that’s proven that over the past six years. Some of those proof points have come from the federal government under the Obama Administration, some from local and state governments (often in partnership with Code for America), some from the American people, working as citizens, many in Brigades. Some have come from other countries struggling with the same problems of programs that meet government needs, but miss the needs of users — the people we are supposed to serve. While Code for America is a non-partisan non-profit, I proudly served the Obama Administration in an effort to improve the delivery of services to the public, and (also in my personal capacity), I planned to serve the Clinton transition team on these same issues. But this idea, that we can remake government in the image of the people, to work for people, and have government we can all feel good about, doesn’t belong to any political party or any administration. No matter how you feel about who sits in the Oval Office now, what last night told us is that this movement matters more than we even knew. And that movement must grow.

If you don’t like the outcome of the election (or if you do), this is a good time to remind yourself that politics isn’t government, and governing isn’t someone else’s problem. It’s ours.

Let’s get to work.