Today, Mike Bracken announced he is leaving his role as the head of the Government Digital Service in the U.K. The first era of successful government digital transformation has ended.

Mike changed my life, and I’d like to take a moment to thank him. I suspect I’m speaking for many others. 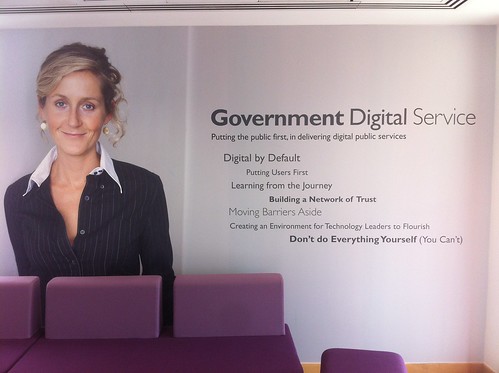 In November of 2012, I went to a foundation-sponsored gathering in London on the topic of open data along with my now-husband, Tim O’Reilly. While we were there, we arranged to visit the Government Digital Service, as we had heard so many great things about their work and had been following their initial project to improve government publishing, GOV.UK, with great enthusiasm. Mike greeted us warmly and proudly showed us around their remarkable offices, starting with the Digital by Default principles emblazoned on boldly-colored walls, right through to their impressive “wall of done,” where they tracked each bit of existing websites’ transition to the new platform. You could see not only the work being done by brilliant, dedicated public servants – longtimers but also people new to government, wanting to make something better – but also the constant presence of the people for whom they worked, represented by user research and stories on the walls, dashboards showing real people using GOV.UK and what they were doing at that moment, and the now-iconic scrap of butcher paper with a square ripped out of it stuck to a window, reminding everyone there that their users were everyday people, going about their business, like the ones right outside. I had been prepared to be impressed, but visiting the team and culture that was being built at Aviation House (and is still being built, across all of U.K. government now) blew my mind. I suddenly and without preparation saw and viscerally understood the future that I and so many others were working towards. It was here, now: already in action, already achieving its intended results, and already working in government making what government did simpler, clearer and faster for everyone. They’d blown past demonstrating possibilities at the edges, and were delivering results from the center. But most amazingly, in 2012, the Government Digital Service was just over one year old: it was formed in April 2011.

Just a few hours after that visit, I received a mysterious email from Todd Park, then U.S. Chief Technology Officer, urgently asking if we could talk. I admired Todd immensely but couldn’t fathom what could be so important. When we spoke that night, he asked me to come to the White House and be his deputy for innovation in government, in charge of the Presidential Innovation Fellows program. I fought back an acute case of imposter syndrom and managed to explain that I was flattered, but had to decline because I couldn’t move my daughter from Oakland to Washington, D.C. However, I didn’t let my shock stop me from delivering a message that I suddenly found very urgent and important: the U.S. desperately needed what Mike and his team had built – a Government Digital Service.

When I got back to San Francisco, Todd and I met for lunch. He thought he was recruiting; I thought I was influencing. Two hours into the lunch, we realized we hadn’t ordered yet. Around the time the waiters were resetting for dinner service, we finally pulled ourselves out of the banquette and headed off in different directions. I was happy, having stood my ground about the job, but even happier that I had made the points about the value of a government digital service to someone who could make a difference.

Todd and I talked often for the next few months, generally following the same pattern. Then I didn’t hear from him for a while. Around February of 2013, the next year, he called with some big news: he’d found the home for the “American GDS,” and wanted me to come to Washington to talk about it. A few weeks later, I was in a room I would come to know well in the southwest corner of the Eisenhower Executive Office Building. There were several people there, including the head of the General Services Administration, Dan Tangherlini, who had also been thinking about how the GSA could provide better digital services to federal agencies, and Haley Van Dyck of the Office of Management and Budget’s E-Gov office, who understood how bad federal government IT was and had been calling for great technical talent in federal government for years. In small groups, armed with sharpies and sticky notes, we sketched a vision of an “American GDS.”

This vision, along with Todd accommodating me splitting my time between D.C. and the Bay Area work schedule, pushed me over the edge. In April I accepted Todd’s offer. I started in June.

July 4, 2013, the day we celebrate our independence from Britain, was the first time I called Mike Bracken for support. We laughed about the irony. It wasn’t the last call I made to the U.K. that year I spent in D.C., and not the last time Mike generously shared his time, wisdom, and enormous compassion. Soon, I wasn’t the only person in the White House paying attention to the U.K.’s GDS. My colleague Nick Sinai paid a visit much like mine, and returned with a mind similarly blown with what was being achieved: not just ideas about policy, but with what the GDS was actually delivering to citizens and residents. Next, Ryan Panchadsaram went. Now, a pilgrimage to the GDS that Mike and his team have built has become a rite of passage (and a shot of energy and inspiration) for every serious digital government reformer in city, state, and federal government in the U.S. and around the world. Each of us is hoping to learn from and borrow Mike’s model and capture even a fraction of the team’s success.

Mike visited the U.S. in October 2013, ironically during the government shutdown and healthcare.gov crises. When he gave the closing keynote at the Code for America Summit in San Francisco, the room was electric as light bulbs went off for a thousand people struggling to transform government; the minutes-long standing ovation they gave him spoke their hope and gratitude. For such a long time, we had been living on the hope and promise of Rosie the Riveter: “We Can Do It!”, that we could digitally transform government. GDS had actually done it. To put icing on the cake, Congress voted to end the shutdown just as Mike stepped off the stage. (I’m sure the timing was pure coincidence.)

That weekend, Mike and I flew to D.C., but few of the dozens of meetings I had tried to set up for him could happen: it was the first working day in weeks for most of the federal workforce. That made room in Mike’s schedule for a few media interviews, including one with Ezra Klein. Two weeks later, after months of fighting to explain that a solution existed to our somewhat desperate problem of failed and failing digital government projects, I walked into a meeting in OMB to hear the words, “Well, the President read the article, and he wants to know what we’re doing about the U.K. model.” That was this article. A week later I walked into the office of one of the President’s top advisors to see him watching a video of Mike’s talk at the CfA Summit. The genie was out of the bottle.

Hundreds of people are responsible for what’s happening in Washington D.C. these days. It’s big news, covered by Fast Company, Politico, and The Washington Post. These groups, not just the U.S. Digital Service and 18F, but technologists across all of government, together with all the ground-breaking work in local and state governments, represent our shot at making government that works for people and by people in the United States. The role Mike has played, through his work at GDS but also personally, by making time for me and many others as we’ve struggled to bring these ideas to life, cannot be overstated. And it’s not just the U.S.; he’s mentored digital government reformers around the world from Chile to Australia and had a profound impact on all of them. Australia’s brand new Digital Transformation Office builds directly on the work that GDS has done.

Mike’s departure is a setback in one sense, but his work and the work of this amazing team cannot be undone. I can’t predict if Big IT will once again dominate technology in U.K. government. If so, I can hope against hope that they are not headed again for more headline-grabbing tech disasters, for multi-billion dollar services that don’t work, as we have seen too many times here in the U.S. as well as the U.K. What I can predict is that everyone in our larger movement will continue to be inspired by what Mike and his team achieved, and that the dozens of digital service units popping up all over the state, local, and federal government – all inspired (if they know it or not) by the GDS – will together move us closer and closer to government that works for its users, also known as the people.

Mike’s departure means the first era of government transformation is over. We’ve been shown the way and it works.

Being true to Mike’s legacy means building a new coalition, fighting for what we know is right, and always remembering to serve the public, not just those in the halls of power. I would like everyone in the global movement to come together today and thank Mike for what he’s helped us achieve, and pledge together to further the movement he started.

If you care about government that works, tweet a thank you at @mtbracken.

Watch Mike’s keynote at the Code for America Summit, 2013:

Code for America recently moved its blog to a new home. We didn't want to leave anything behind, so we moved this post by Jennifer right here. We hope you enjoy it.